Acer has launched an all-new gaming laptop for casual gamers called Nitro 5 Spin. It comes with a starting price of $999 and will be made available for purchase in North America from October. It is a powerful powerful 2-in-1 convertible and runs eighth generation Intel Core processor. This is going to compete against the likes of HP Spectre x360 and Samsung Notebook 9 Spin. Here, we pay a close look at its features:

Acer Nitro 5 Spin flaunts a 15.6-inch full-HD rotating display with resolution of 1080 x 1920 pixels. It features an all-aluminum chassis with black brushed hairline finish and has recent accents. It utilizes the proprietary technology called Acer Color Intelligence. This adjusts gamma and saturation in real-time, optimizes screen color, brightness as well as saturation without clipping. Also, the display is Acer BluelightShield which allows gamers to reduce the blue light emissions causing eye strains. It is a 2-in-1 gaming laptop and its convertible design features four modes: laptop, tent, display and tablet.

Under the shell, it is powered by eighth-generation Intel Core processor. In terms of GPU, it houses Nvidia GeForce GTX 1050 graphics. The laptop is available with PCIe SSD of up to 512GB storage. 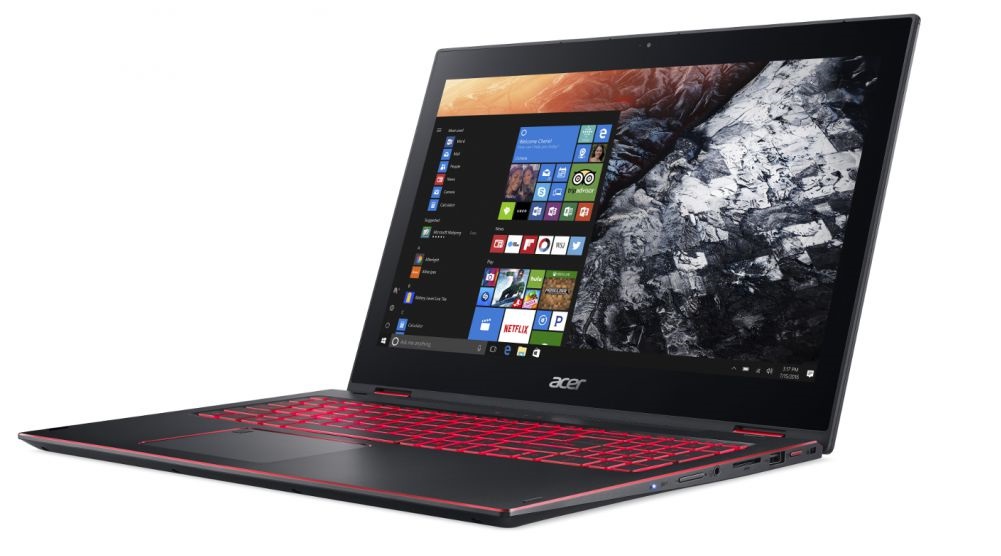 In terms of audio, it comes with two front-facing speakers and a subwoofer. Acer has implemented Dolby Audio Premium, Acer Smart Amplifier and Acer TrueHarmony for clear sounds. The audio and video automatically reverses based on screen orientation. This ensures that the speakers are never blocked and the audio and visuals are always facing the viewer.According to the company, it provides up to 10 hours of battery life, making it ideal for playing modern games such as Dota 2, Overwatch and more.

Other useful features include the use of backlit keyboard and an omni-directional ExoAmp Antenna which is crafted to get the best out of local Wi-Fi signal. This gaming laptop also includes a fingerprint reader to quickly and securely verify owner’s identity via Windows Hello.
A quick look at specifications of Acer Nitro 5 Spin:

Do you like this gaming laptop? What are your views about it? Share with us in the comments section below.