Nokia-branded Android smartphones are soon to hit market in 2017 and the rumors are on the high note. The latest leak is regarding the core specs for the Nokia Z2 Plus. The previous rumors do talk about Nokia D1C, Nokia C1, Nokia P and now the Z2 Plus is entirely new. It is also rumored that that Nokia will be introducing three smartphones based on Android OS. With these rumored specs and features circulating around the web, 2017 might bring the old and new tech fans of Nokia. According to Softpedia, Nokia Z2 Plus is a high-end model with advanced functionalities.

The Nokia Z2 Plus has been spotted on benchmarking website, Geekbench where it reveals some of the key features and specifications of the phone. According to the leaks, Nokia Z2 Plus achieves a single-core test score of 2156. It performs a multi-core test score of 5217. As far as the processor is concerned, it will be powered by a Qualcomm 820 quad-core processor clocked at 1.77GHz. It is expected to come with 4GB of RAM and run Android 6.0.1 Marshmallow operating system. 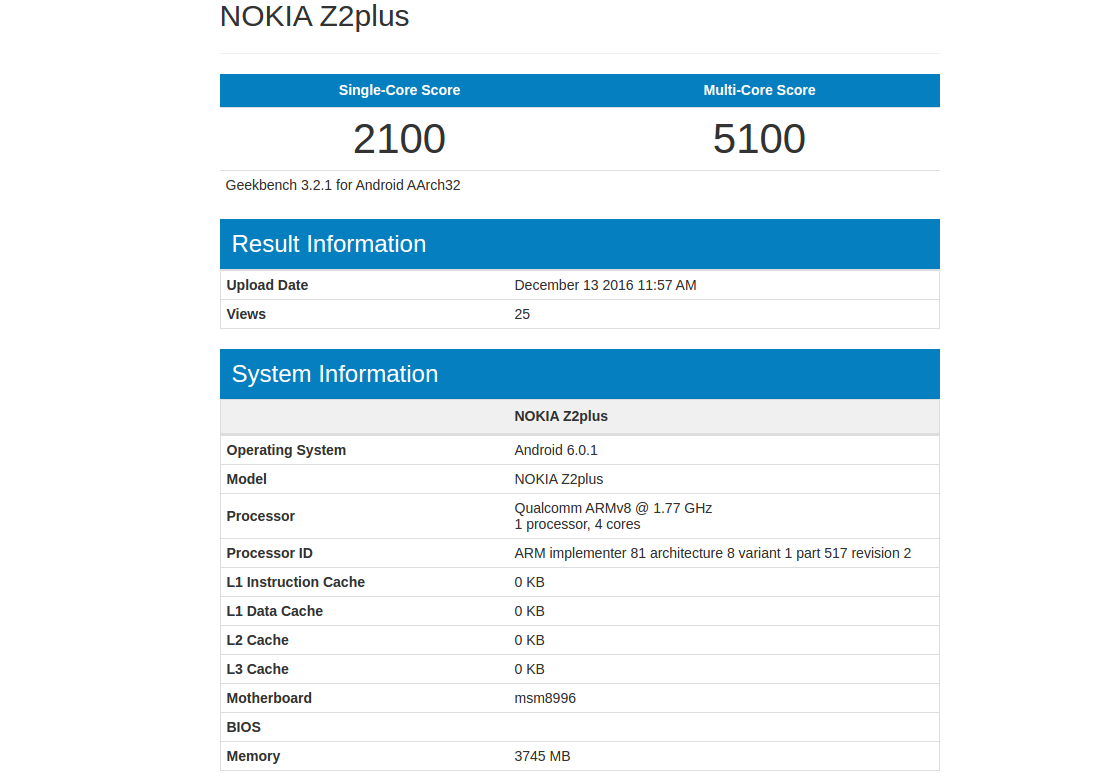 Nokia has not officially announced the inclusion of Nokia Z2 Plus to its smartphone range that is due for launch next year. According to Forbes, the company in partnership with HMD will be rolling out the android version handsets that run SnapDragon 835 chipset. It will come with 6 GB of RAM. The two devices that are said to be in works are the Nokia P and the Nokia D1C which is expected to be a flagship phone. They are expected to have 5.2 and 5.5-inch display with RAM of either 4GB or 6GB capacity. Nokia C1 is said to run Snapdragon 830 SoC coupled with 4GB RAM. It could be made available in various storage variants such as 32GB, 64GB and 128GB. It may be backed by a 3210mAh battery.

The phones are expected to arrive in the first quarter of 2017.

Keep visiting our blog and we will keep you updated of all the tech news.