Microsoft Surface family has officially expanded and it now includes an elegant all-in-one desktop as well. At the New York City event, Microsoft announced the Surface Studio along with an updated Surface Book. It will be available in limited quantities for $2,999, $3,999 and $4,199 depending on the hardware configuration. You can pre-order Microsoft Surface Studio on the Microsoft Store will be available in the retail stores of Microsoft soon. This desktop has been geared towards creative professionals. It is launched as the best and beautiful all in one PC in the market. Here are the complete details about this PC.

It is incredibly thin and vibrant with its 28-inch LCD panel and zero-gravity hinge. It lets you move from standard position to a drawing surface with just one finger. This hinge allows a user to push back the screen and turn the device into a giant display canvas and on this canvas they can work. Surface Studio comes with a fixed base and has a 12.5mm thick screen that floats above it on two arms. The display of 28-inch is large and immersive and uses a typical 3:2 aspect ratio with a resolution of 4500:3000. It features a 4.5k ultra HD PixelSense display with a 10 point multi-touch. It is capable of displaying full DCI-P3 color space and using Windows 10 Action Center sidebar, they can switch between the Adobe sRGB and full DCI-P3 color space. The Microsoft’s head of Windows hardware, Panos Panay stated that the company has engineered the LCD panel at the thinnest ever with 1.3mm.

The Surface Studio works with Microsoft Surface Pen and the new Surface Dial. Surface Dial offers a new way to manipulate the tools and workspace intuitively. It can be left on a desk, tapped or rotated and you will see the menus on the screen informing you about what it is controlling. You can also place it against the screen. It is priced at $99 and is included with every Surface Studio.

It is powered by either i5 or i7 Intel Core processor paired with 4GB of NVIDIA GeForce GPU. It can come with up to 32GB RAM with storage space of either 1TB or 2TB. The 270W power supply is built into the base and thus, only a single cord is necessary. The three fans smart adjust the cooling. In terms of connectivity, it has four USB 3.0 ports, a SD card reader, 1 Gigabit Ethernet port, a Mini DisplayPort and a 3.5mm headphone jack. Also, it comes with a Windows Hello face sig-in camera. 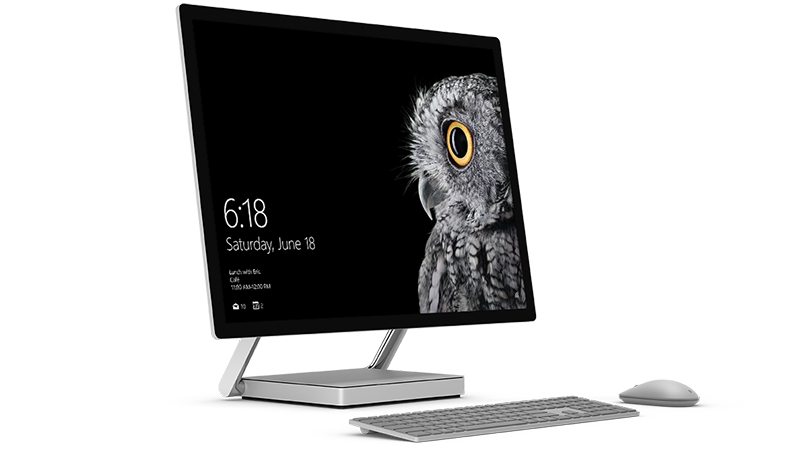 Are you planning to purchase Microsoft Surface Studio? Let us know your views in the comments.