There are many sizes of drones available today with varying camera and photography capabilities but here’s one that can land to surfaces other than grounds. Yes, research students at Stanford University have developed a quadcopter that can land on the ceiling, as well as walls in a vertical position. The drone comes with the ability to land and climb on walls. This newly developed flying robot is named SCAMP drone, an abbreviation for Stanford Climbing and Aerial maneuvering Platform. 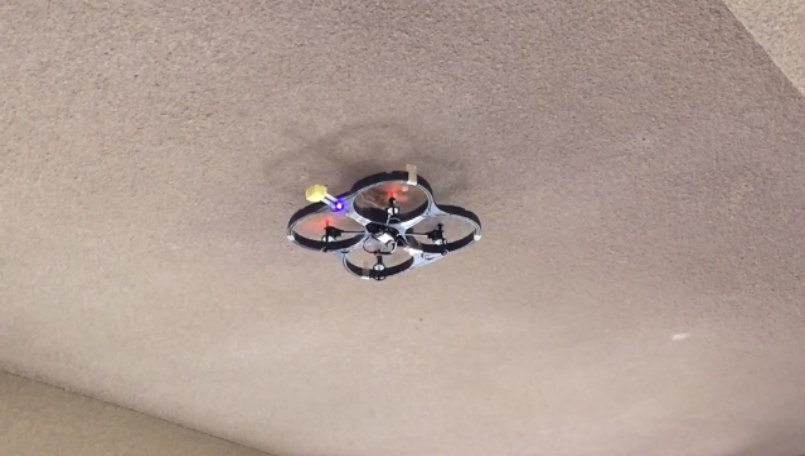 One of the major issues affecting the use of drones is the limited battery life. This further reduces the flight and overall usage time. But, the newly developed SCAMP drone creates a series of microspines to enable a drone to perch and drag itself against the wall. It can roost on any wall or ceiling of any inclination and height and capture more stable pictures and videos of the sight as compared to a hovering drone.

They have released a video showing the different functionalities that this drone is capable of performing. Check out the video.

Stick to Wall or Ceilings

SCAMP drone flies gently into a wall and with its tail; it pitches up on the sides. The spine gets attached to any inclined surface. Perching lets the drone stay at the same spot rather than hovering in the same place. To perch on vertical surface, the drone flies straight into the wall and the microspines catch against tiny bumps on the surface. The ability to perch on a wall also implies that the drones can be better protected against the environment. It can climb a wall just like a spider, using a leg like structure. Unlike other drones that tend of fall down on group, it automatically computes the misstep and activates propellers to stabilize it. It can climb up the wall to reach the top and fly off in windy situations as well.

“While it’s still not as foolproof as landing on a level surface, we are closer than ever to making perching accessible outside of a research environment,” writes Morgan Pope, a researcher involved with the project.
You can also check out sports drone that comes with impressive smartphone controls by clicking here.
Are you excited about SCAMP drone that actually sticks to wall or works like a spider? Do you find this innovative concept exciting? Share your thoughts with us in the comments.