Blu is a US-based smartphone maker and has entered the Indian market with launch of two Windows Phones. Dubbed as Win JR LTE and Win HD LTE, both these are affordable and run on operating system Windows Phone 8.1.

Blu Win JR LTE features a 4.5 inch FWVGA display with 854 X 480 pixels. It runs on 1.2GHz quad-core Snapdragon 410 64-bit processor with Ardeno 306 GPU coupled with 512MB RAM. The device comes with 4GB of internal memory with the option to expand up to 32GB via microSD. It comes with Windows Phone 8.1 and is upgradable to Windows 10 later this year.

On the camera front, it comes with dual camera support with 5.0 mega pixel autofocus camera with LED flash on the rear and front facing camera for selfies. The handset features a beautiful cross hatched patterns along the color matched metal finishing on side keys. The finishing touch is a round curve design. The device features 4G LTE / 3G HSPA+, WiFi 802.11 b/g/n, Bluetooth 4.0, GPS support, and 2000mAh battery.

It is available in Grey, White, Orange, Yellow and Pink colors and the cost is Rs. 5,999 in India. 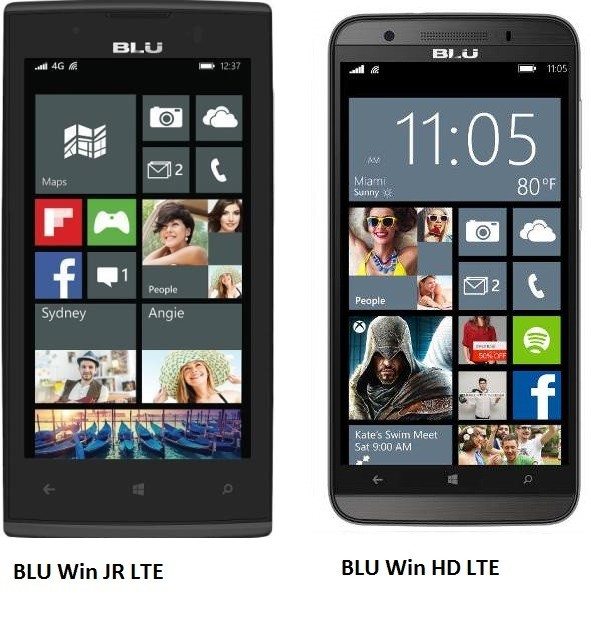 Blu Win HD LTE comes with a bigger display of 5 inch HD IPS OGS display with resolution of 1280 X 720 pixels. It has 8GB of internal storage with the option to expand up to 32GB via memory card. It is powered by 1.2GHz quad-core Snapdragon 410 64-bit processor with Ardeno 306 GPU. It has 1GB RAM and runs on Windows Phone 8.1, upgradable to Windows 10.

On the camera front, it has 8 megapixel auto focus rear camera with LED flash and 2MP front-facing camera. It is powered by 2500mAh battery and features 4G LTE / 3G HSPA+, WiFi 802.11 b/g/n, Bluetooth 4.0, and GPS. It supports dual SIM and comes in Grey, Yellow, White and Orange color variants.

Blu is the market leader in providing unlocked devices in United States. It specializes in providing cheap Android smartphone and as one of the Microsoft’s partners; it has also launched a few Windows Phone handsets. Headquartered in Florida, it has a vast portfolio of advanced, unlocked mobile phones throughout the United States and Latin America.

Both these handsets are available to Indian customers via SnapDeal.com

Do you like these phones from BLU? Let us know your thoughts in the comments!