Moto G is the company’s best-selling smartphone and has helped the company to win significant market share. During the global launch event, Motorola has announced the new, third generation Moto G with improved specs. The 5 inch screen device costs $180 without any carrier subsidy. With this smartphone, the company targets people who are looking to spend little money and keep their devices for long.

The improved Moto G is now waterproof. It comes with a 720p 5-inch display and 1 GB or 2GB of RAM. The handset features a quad-core Snapdragon 410 chip and 8 GB of storage. The phone keeps the 5 inch screen but upgrades the internals with a Snapdragon 410 processor and a 13 MP rear camera. The battery is a little bit bigger at 2,470 mAh. In addition, it boasted the camera by offering 13-megapixel rear shooter and 5 megapixel front-facing camera. Motorola says that it has significantly improved the camera over its predecessor. The phone will come with 4G LTE as a standard feature. It also includes a microSD slot for more storage.

Like its predecessor, you will be able to customize Moto G with Motorola Maker tool from the white front panel or base black. The Moto Display gives you a quick preview of notifications without the need to wake up your phone. Quick Capture activates the camera by twisting the wrist twice and the Chop Twice launches the flashlights with a quick flick of the wrist. 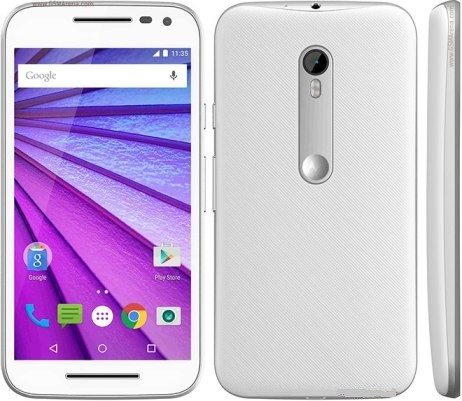 The look of the device is in line with Motorola’s 2015 line. The edges and the rear accent are metal and standard colors are black and white. One can customize it with 10 different Motorola shells and 5 flip shells available in a variety of colors and materials.

Motorola also unveiled two accessories, Moto Plus and Moto Surround. The Moto Plus is an over-the-ear headphone for $59.99 while the Moto Surround is a band that wraps around the neck with ear buds that can be extended to the ears. It will be available for $69.99.

A quick look at specifications of Moto G 3rd generation:

Do you love this brand new Moto G 3rd generation handset? Let us know your thoughts in the comments!