Rumors have been circulating for a while that Microsoft may incorporate its personal digital assistant, Cortana, in the major version of Windows 9. If you want to know about Cortana, click here.

According to a report by Neowin, Microsoft is closer to incorporating Cortana into major release of Windows 9. Neowin describes Cortana’s “graduation” from a testing stage to a “let us push this forward and see if we can ship it” stage. It seems that Cortana would run as a built-in app and will pop up in a screen about one-fourth the size of your display. Neowin reports that Cortana works like an app and opens when you type a question. 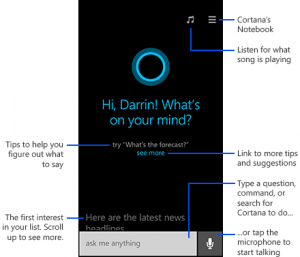 Also, Microsoft’s group program manager for Windows Phone revealed during a panel that Cortana will move beyond the phone. And a job listing from Microsoft pointed out the same. They were looking for those who redefine the personalization experience on Windows and help screen serendipitous moments of discovery and satisfaction for the users.

As with Windows Phone version, you can talk to Cortana, ask her question while the desktop Cortana will allow you type them with your keyboard as well. This feature is sure to be required one for business environment. Cortana for Windows Phone is live in multiple countries as beta, and users in India, Canada and Australia are able to opt in to the best test for the American version.

With possible inclusion of Cortana on the Threshold feature list, the next release of Windows is shaping up to include new features and refinements. In addition to Cortana, a new mini Start menu, removal of the Charms Bar, inclusion of a virtual desktop capability are all likely to be included in the Threshold.

Microsoft has not yet commented on the latest reports, and a full release for Windows Phone is not expected until end of this year, so any talk of desktop version is premature.

What do you expect from Cortana for Windows desktop? Let us know your thoughts in the comments.