The search engine giant, Google, is aiming to make the process of identifying humans a little less annoying with the new version of the reCAPTCHA technology. The announcement comes as a part of the news; coming from this week’s Google Next’ 17 conference in San Francisco. The new technology is going to be completely invisible to the end user. The invisible reCAPTCHA allows websites to verify if someone is a robot or not. Let’s check out the details.

CAPTCHAs are irritating but are necessary to identify humans. It involves asking users to perform visual-perception tasks. These prove that they are real. But, the process can be frustrating for the users especially when they are appear in middle of important transactions. They are also a hindrance for the visually impaired users. With the latest invisible reCAPTCHA, they need not face any blurry images. You can also check out the official video below.

The marketing of the new version of invisible reCAPTCHA service reads as “tough on bots, easy on humans.” Though Google is not offering any details on how exactly the security system works, but it relies on machine learning and advanced risk analysis to make informed decisions. It identifies who’s human and who’s a bot. According to Google, the new technology separates man from machine without any tricky tests or checkboxes.

The old reCAPTCHA system requires one to check “I’m not a robot” to get through the sign-up page. Now, the newer version is simple and easy. It does not use any challenge or checkbox. It works invisibly in the background to identify bots from humans. When websites switch over to the invisible CAPTCHA system, most users won’t see any CAPTCHAs or “I’m not a robot” checkbox. If in case, someone is flagged as “suspicious”, and then it displays the usual challenges. 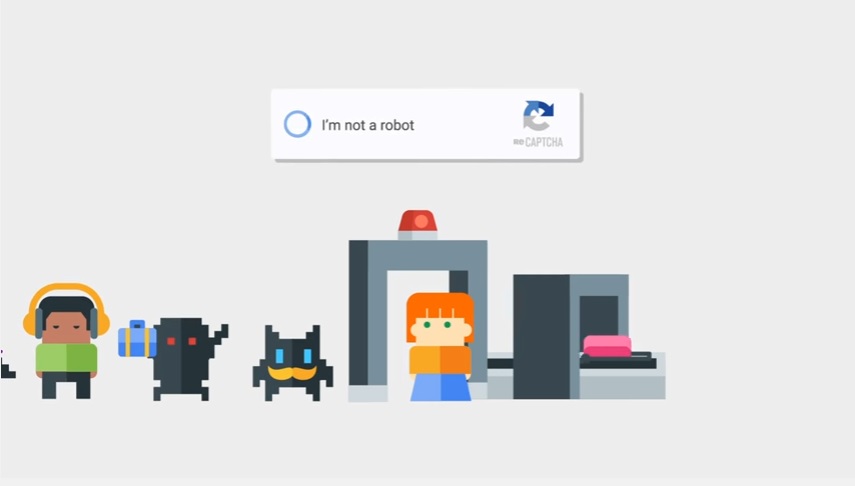 The system uses a broad range of cues to distinguish humans from bots. Google said that a significant portion of valid human users will now be verified without need of performing any of the usual verification tasks. The reCAPTCHA system is a security safeguard that helps to weed out malicious bots from human beings.