Samsung’s flagship tablet was expected last year but due to the Galaxy Note 7 debacle, it did not come up. Now, rumors and leaks about Samsung Galaxy Tab S3 are on all high. It has just been certified by Federal Communications Commission, FCC, is a US regulatory agency. The latest rumor has the new tablet will unveil in the first quarter of 2017 and most likely at MWC 2017 which is scheduled to be held in February.

Galaxy Tab S3 has popped up in a listing on Geekbench. According to that listing, it will sport a high-end hardware. It is expected to be powered by Qualcomm Snapdragon 820 SoC along with 4GB of RAM. The website also shows a single-core score of 1686 and a multi-core score of 4170. In terms of software, it is likely to run Android 7.0 Nougat with Samsung’s proprietary TouchWiz UI on top of it. A fingerprint scanner is also expected.

We are likely to see Galaxy Tab S3 in two variants: 9.6-inch and 8.0 inch sizes. The display panels on both variants will sport a resolution of 2048 by 1536 pixels. GFXBench and Geekbench both suggest that Samsung will use the Exynos 7420 SoC for the upcoming device.

If the leaks and rumors are to be believed, the upcoming tablet will perform near-equal to Galaxy S7 and S7 Edge. This is going to be an attractive feature of Galaxy Tab S3 as phone manufacturers focus on smartphones more than tablets. 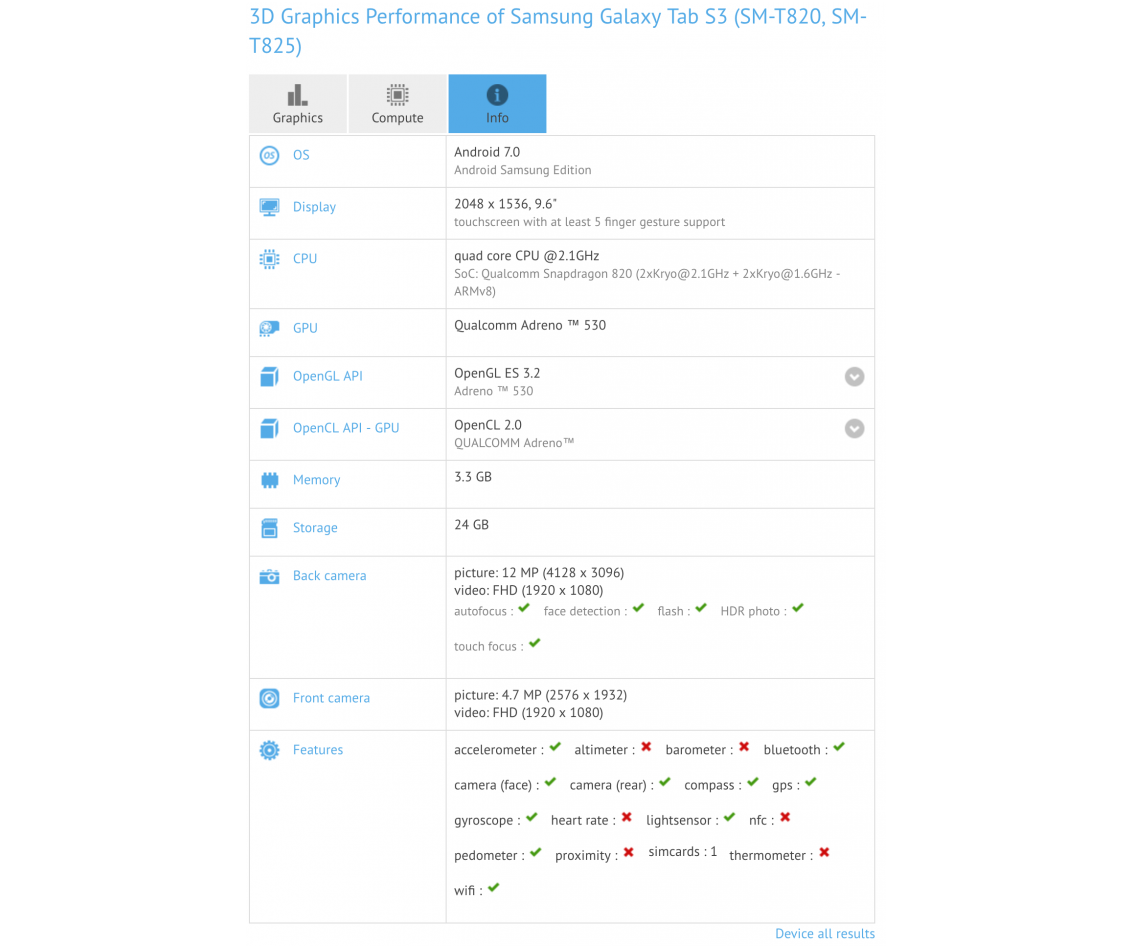 In terms of multi-media, it will have Adreno 530 GPU. It is expected to include 32GB of onboard storage which can be expanded via microSD card slot. The other specifications include a 12 megapixel rear camera and a 5 megapixel front facing camera.
The rumored specifications of Samsung Galaxy Tab S3 include:

As and when the official notification regarding the release of this upcoming tablet comes up, we will keep you updated.

Are you waiting for the release of Galaxy Tab S3? Let us know your thoughts in the comments section below.