Samsung has announced the latest in its A series of smartphones. It is called Samsung Galaxy A9. The device is now listed on the Chinese website and will be available in white, gold and pink color variants. The Galaxy A9 sits on top Samsung’s premium-built A-series. The most impressive feature is the huge screen and a big battery. Let’s have a close look at its features:

The Galaxy A9 features a huge 6-inch 1080p Super AMOLED display with 2.5D curved glass. It comes with full-HD 1080 x 1920 pixels resolution. It is powered by Qualcomm’s 1.8GHz Snapdragon 620 octa-core processor paired with 3GB of RAM, and Adreno 510 GPU. It comes with 32GB of internal space and there’s a microSD card slot as well which supports cards of up to 128GB capacity. The smartphone runs Android 5.1.1 (Lollipop) skinned with Samsung’s TouchWiz UI.

The rear camera in Galaxy A9 is capable of shooting 13-megapixel photos and supports optical stablisation as well. The rear camera comes with LED flash, OIS, and f/1.9 aperture. You can also access the camera app by double pressing the home button. The smartphone comes with an 8-megapixel front camera for selfies. The device also houses a fingerprint sensor.

The smartphone comes with connectivity features such as 4G, WiFi a/b/g/n, Bluetooth 4.1, NFC, GPS/AGPS/GLONASS, ANT+ and Micro USB. According to the company, it will be compatible with Samsung Pay. 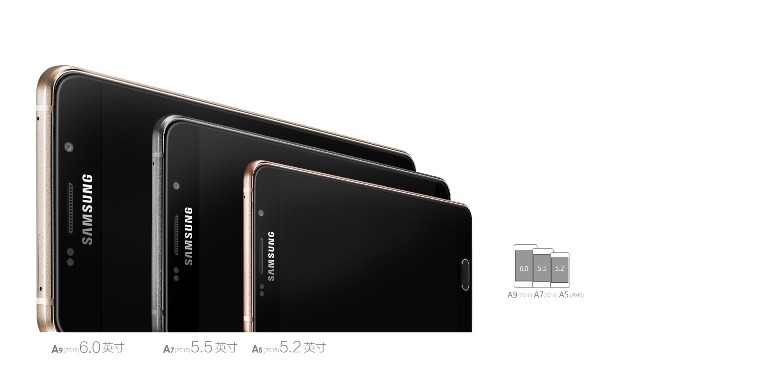 Let’s have a look at how Samsung Galaxy A9 has improved over Galaxy A7.

A quick look at Samsung Galaxy A9 and A7:

All-in-all, it is a nice smartphone that comes with impressive specifications. It has a larger screen and a bigger battery. It comes with impressive specifications but the final price disclosure and hands-on experience will reveal the actual worth. The device will be available in China later this month but pricing will be confirmed at a later date. The company has not yet disclosed the pricing and availability of the phone in US.

Are you Samsung smartphone user and does Samsung Galaxy A9 impress you? Share your thoughts with us in the comments.