The rumors and leaks about the upcoming flagship smartphone, known under the name HTC U Ocean or HTC 11. Noted tipster Evan Blass, known as @evleaks has posted an image of the new HTC flagship on Twitter. Rumors suggest that the upcoming phone is codenamed as Ocean and might get launched under its U series. It could simply be called HTC U smartphone. It is going to be somewhat different from the other U Series devices.

There have been several reports about the HTC Ocean offering insights about the smartphone’s hardware, new design and the underlying software. It is expected to come packed with Qualcomm’s latest processor, Snapdragon 835 SoC. It is going to be a strong contender against the upcoming Xiaomi Mi 6, OnePlus 5 and already launched Samsung Galaxy S8 and S8+. The smartphone is expected to feature Edge Sense, which will enable users to perform various activities by just tapping on the metallic frame. The Edge Sense utilizes the frame-embedded sensors to allow user to control various customizable actions with gestures like squeezing or swiping along sides. 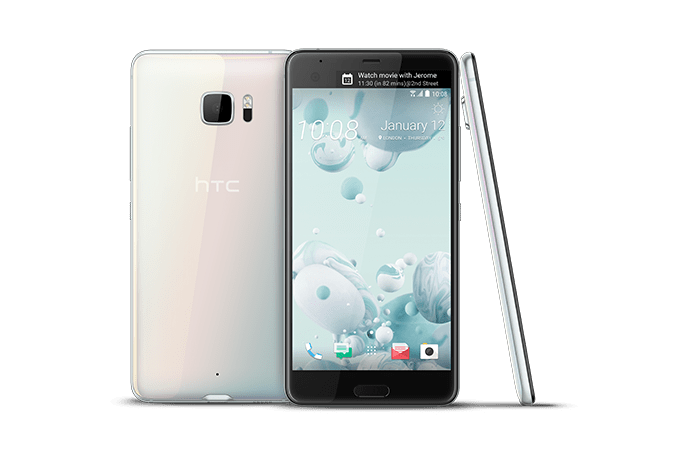 HTC U looks a lot like the U Ultra. It features a glass exterior and comes with bezel-less display. There’s a fingerprint scanner below the display. The phone will carry an IP57 rating for water and dust resistance and may give away the 3.5mm headphone jack. It is water-resistant in up to one meter of water at normal pressure for 30 minutes. The front of the phone sports a near bezel-less display and features a fingerprint sensor as well. It is expected to run the latest operating system, Android 7.1.1 Nougat. It comes packed with 5.5-inch WQHD display having resolution of 2560 x 1440 pixels.