There have been endless speculations, rumors and leaks on the launch of Xiaomi Mi 5 and thankfully, they all will be ended with the confirmation of release of the device on February 24.

Xiaomi continues to dominate the Chinese market and has had a tough time in new markets such as India, Indonesia, Brazil etc. The predecessor, Mi 4 was launched way back in July 2014 and now the company is all set to launch the headset with Snapdragon 820. As Snapdragon 810 comes with serious heating issues, the company has apparently fixed those.

Xiaomi’s co-founder and vice-president Liwan Jiang, shared the announcement on his Weibo account. This post has ended all rumors regarding the launch of Mi 5 as it confirms that the phone will be unveiled on February 24. 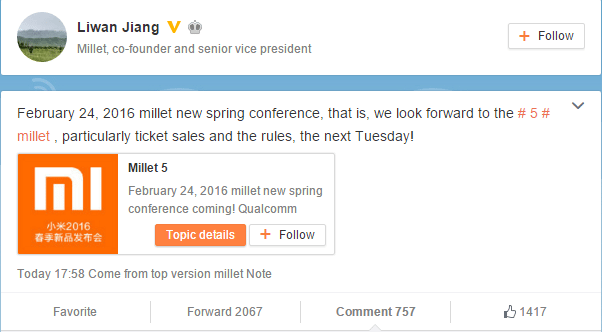 Mi 5 is said to feature a 5.2 inch display with either full-HD or QHD resolution. It is expected to sport a 2.5D curved glass display. It will feature a 2K display, Snapdragon 820 SoC with a 16 megapixel rear camera and a 13MP on the front. It could come in 3GB and 4GB versions with 16GB and 64GB storage space respectively.

Under the hood, there’s a Snapdragon 820 chipset to power the device. Android 6.0 Marshmallow OS will run the phone with MIUI 7. The phenomenal feature of the phone is the 3,600 mAh battery unit. It will apparently introduce a fingerprint sensor on the home button and if rumors are to be believed, it is the world’s smallest and fastest fingerprint scanner.

In addition to the official launch, a new report from China claims that it will come in four variants. If it is to be believed, the flagship product will launch in two all-metal variants, and two glass variants.

What do you guys think about this new Xiaomi flagship device? Share your thoughts about Xiaomi Mi 5 in the comments.