Chinese smartphone maker Oppo, has now started running its business in India. Do you remember Oppo N1? It was announced way back in September last year and now Oppo is teasing the launch of Oppo N1 Mini in India. The company on Sunday tweeted an image of the Mini carrying the caption,”Mini in size, Max on fun”. The image includes text Revolutionary 24 Mega Pixels Ultra HD Camera, Coming Soon!”

The post also talks about the revolutionary, 24 MP Ultra HD capture mode. Although Oppo has not announced exact launch date, but is expected to soon hit Indian mobile market. The price of the device is also not announced but it will be revealed when it is launched officially. 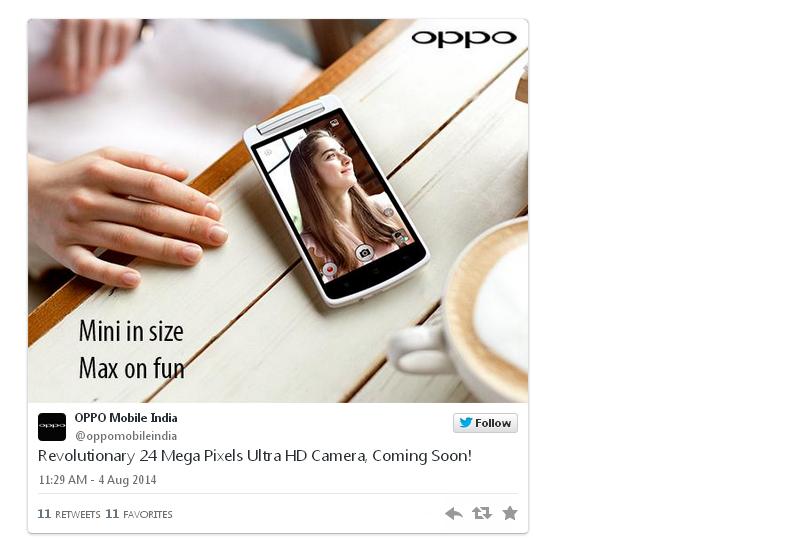 When we talk about graphics, the device has Adreno 320 GPU and has 16GB internal memory with no expandable storage support. The screen is protected by Corning Gorilla Glass 3. The N1 Mini supports Bluetooth, Wi-Fi, GPRS/EDGE, 4G LTE, GPS/A-GPS, and 3G connectivity options. The smartphone features a rotating 13-megapixel Sony IMX214 sensor camera with LED flash. The camera is capable of taking pictures at 24 Megapixel resolution using Ultra HD mode. Oppo N1 Mini runs on ColorOS which is based on Android 4.3 Jelly Bean.

Although the exact date of release of handset in India is not disclosed but is expected to be soon launched.
Do you like the features of Oppo N1 Mini? Will you buy this smartphone? Share your views with us in the comments below.