Amazon announced two new smartphones joining the lineup of Prime Exclusive Phones. These are Alcatel A30 and Moto G5 Plus. Both are available at subsidized prices only for Prime members. The recently announced Moto G5 Plus is being offered at starting price of $184.99, a discount of $45. Alcatel A30 is offered for $59.99 which is flat $40 off the retail price. Also, these Prime Exclusive Phones are available for pre-order now. Just like BLU R1 HD is already a part of it, these two also join the league.

Amazon launched Prime Exclusive Phones program back in 2016 with BLU and Motorola. Under this program, it offers Prime members incredible discounts on the popular unlocked android smartphones. Also, the discounted pricing is supported by personalized offers and ads. This may also include deals displaying on the phone’s home screen. 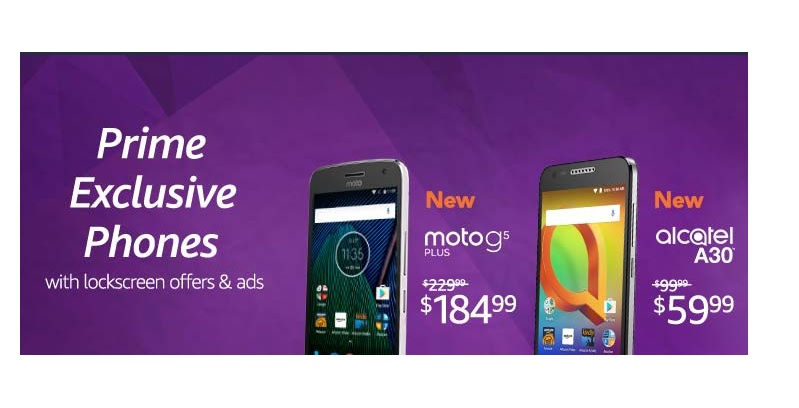 Alcatel A30 features a metallic silver frame having a texture back. It flaunts a big 5-inch 720p display. The smartphone comes with useful and intuitive gesture controls such as tap to wake, flip to mute etc. Under the hood, it is powered by Qualcomm Snapdragon quad-core processor along with 2GB of RAM. It houses 16GB of internal storage which can be expanded further via microSD card. The smartphone also offers an impressive all-day performance.

In terms of optics, it has an 8-megapixel rear-facing camera and also a 5-megapixel front-facing camera. It also comes with a variety of camera modes to offer you complete control of your pictures and videos. It runs Android 7.0 Nougat with Google Mobile Services such as Google Maps, Gmail, Google Play, YouTube and more.

Moto G5 Plus is one of the best-selling smartphones. It features a sleek metal design and flaunts a 5.2-inch full HD display. It is powered by a fast 2.0GHz Qualcomm Snapdragon 625 octa-core processor coupled with 2GB or 4GB of RAM. There’s a 12MP rear-facing camera having dual autofocus pixel technology with large f/1.7 aperture perfect for low light pictures. At the front, it has a 5MP wide angle camera for selfies. Moto G5 Plus features an all-day battery and also supports TurboPower fast charging.

The phones are available for pre-order. Moto G5 Plus will be released on March 31 and Alcatel A30 will launch on April 19. Amazon is offering one of the best deals to grab. So, pre-order them before stock runs out.

Are you going to purchase any of these smartphones? Let us know your thoughts in the comments section!