In the arena of software testing, testing levels are used to minimize the defects/gaps in an application for better quality. Testing levels help in reducing bugs which are generated in each development phase of an application. Different testing levels have different functionality and output results for the software. Levels in testing can be only attained by proper follow of testing steps designed.
[leaderad]
For example, if you are following simple SDLC phases for software development then you need to follow testing levels for every phase of SDLC model. 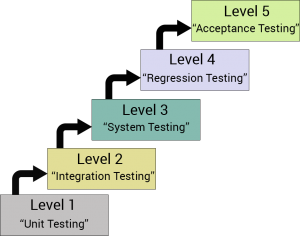 1) Unit Testing
Unit testing is the first level of testing and focuses on testing small units of individual codes. Unit testing is always conducted before integration testing. Unit testing can be done by using different testing frameworks and tools. Manual testing for this level is a time consuming task. Thus, it’s better to use automated testing framework or tool.
Goal: The purpose of this testing is to isolate each and every individual part and ensure that all parts are working correctly.
Performed by: Developers
Responsibility: To create and execute test cases for a unit of code
Advantages: Errors/Defects are found at an early stage

2) Integration Testing
Integration testing is one of the crucial testing levels. This testing is conducted to test the combined parts of the application to check that they function correctly together. In simple words, two or more units are combined to check their working functionality. This testing is achieved by using four different integration approaches – Big Bang Testing, Top-Down Testing, Bottom-Up Testing and Sandwich Testing.
Goal: The goal is to identify problems that can occur when different units are combined
Performed by: Testers
Responsibility: Preparation of test plan and test cases and their execution
Advantages: Prevents and reduces functional and performance errors

3) System Testing
System testing is conducted to test a system as a whole. This means here you need to test the whole working of the software application in a detailed form. In this testing, we verify that the system works fine with other elements to which it is being interacted. System Testing is complete only when it meets the business requirements: functional and non-functional requirements.
Goal: Here the goal is to verify the system specifications according to business requirements
Performed by: Testers
Responsibility: Running of a system as whole to meet the necessary. It includes preparation and execution of system test plan and system test cases.
Advantages: It assures that system functions according to its specification

4) Regression Testing
Among popular testing levels, Regression testing is conducted to ensure that the changes made to the application to fix its bugs do not cause any defects to the application. This testing makes sure that a bug fix does not result in another fault.
Goal: Regression testing performs retesting for the software application for the changes made
Performed by: Testers
Responsibility: Retesting of the system after the bug is fixed
Advantages: Lowers the gaps in testing

5) Acceptance Testing
Regression testing is the final testing level. As the name specifies, this testing is conducted to accept the software and starts its use. In this stage all maximum bugs have been fixed and software application is ready for uses. This testing is conducted in two parts: Alpha testing and Beta testing. Here end user’s test the software as whole and experience their experience while using it.
Goal: Is to test the system or software that it meets the user requirements
Performed by: Quality Assurance Team
Responsibility: Checking for the software, how user friendly it is
Advantages: High level of user satisfactions

The testing levels ensure that the intended application performs in the desired manner. The organization should include these levels of testing for software quality and performance.

If you have something to add to our story, please share your opinions in the comments.