Sky Force celebrates its 10 year anniversary as a mobile game with new release Sky Force 2014. The original Sky Force came out on mobile devices in the year 2004. Now a decade later, Sky Force 2014 amazes its fans of scrolling based shooters. The intuitive controls are a huge reason for the success of this game. Sky Force 2014 offers a scrolling shooter experience with a new element of social gameplay.

The goal is to move your craft and shoot down everything in sight except for the hostages. When you destroy tanks, plans and machine gun turrets, stars pop up and these stars serve as a currency to upgrade your craft’s strength. At the end of each stage, you need to destroy a boss to achieve your goal. Stages are punctured like bosses and they all look stunning in their 3D engine. An interesting feature here is that even if you defeat your enemy and complete the stage, you won’t be able to unlock the next level unless you achieve specified goals. Powering-up weapons is also vital for getting medals. There are huge powers such as shields, smart bombs and you need to monotonously grind through levels to earn enough stars for given improvement. This game offers you a well designed arcade shoot’em up experience.

The techno soundtrack adds to the hypnotic feel of playing Sky Force 2014. The simplicity of the game along with not having to deal with a multitude of controls, turn this game into a seamless addicting experience. In terms of look and combat, this game offers you fantastic shooting experience. 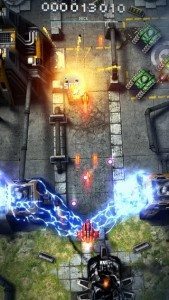 Sky Force 2014 is a highly polished arcade shooter and it would be nice to see it free flowing to let you play levels at your own pace. One odd part of this game is that it is relatively slow moving in introduction of enemies, and thus the overall pacing. Other than that, it is a fantastic game for shooter fans.

Have you downloaded this game on your iPhone or iPad? Do you like this game? If you have something to say on this story, post a comment here.